The Armada of 1588 is widely known, its failure of a Spanish invasion of Britain due partly to the Navy and partly – perhaps mostly – due to the weather. Less well known is a second Armada in 1779. Full details can be found on Wikipedia and many published sources, but briefly, the French and Spanish, with whom we were at war, aimed to take the Isle of Wight and the naval base of Portsmouth, then to destroy the British fleet.

William Williams of Newlyn recorded the sighting of the invasion fleet in his diary:

“August 15th 1779, on Sunday. A large fleet of french and Spanish ships of war off the Lizard and farther west, plainly to be seen from the town, bound up the channel….”.

The Spanish fleet alone included 36 ships of the line and should the combined fleets be successful, there were transport ships and a large French army ready to invade, waiting at Le Havre and St Malo. The huge fleet was first sighted on the 14th August off the Lizard, causing great alarm, but after some manoevering up and down the Channel there had been no major opposition from the Navy. HMS Ardent was two days out from Plymouth alone and had no idea the enemy fleet existed; she was easily taken by surprise. 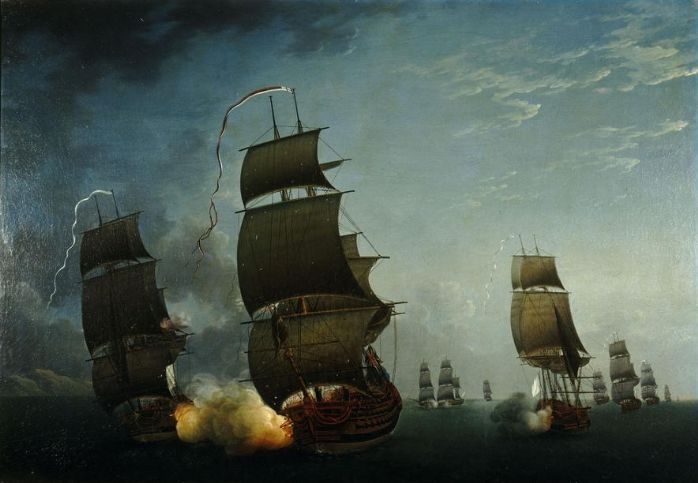 The British fleet in fact had heard something of the French fleet leaving port and was busy patrolling off the Scilly Isles unaware of being bypassed; the 40 or so British ships of the line there did not make contact with the combined fleet until the latter was blown out of the Channel by an easterly wind. The British then dodged the enemy and made for well defended Portsmouth, hoping the combined fleet would follow them to a more favourable battle site. This happened for a short while but a letter of the 4th September from John Knill (Mayor of St Ives) to the MP of Helston reported that the enemy were still off Falmouth - Knill thought the enemy were threatening Falmouth in order to provoke the British fleet under Sir Charles Hardy, to stop and fight. Hardy had however no intention of doing this and had already sent a cutter to the Port Admiral at Plymouth explaining his plan and asking for assistance ‘without a moment’s loss of time’.

However the Armada fleet had its own problems of sickness and shortage of food plus the threat of adverse weather in the approaching autumn, so their invasion plan was aborted and the fleet set sail to return to France on September 3rd.

It had not originally been an untimely plan from the French and Spanish points of view. There were large and increasing demands on the British Navy. Ships were required to patrol the North Sea, the Channel and Western Approaches and to blockade French ports. Ships were also needed in the West Indies to combat the French and Spanish ambitions and to guard our sugar plantations and in the East Indies the Dutch presented further threats. We were also at war with the American independence forces, with the Royal Navy constantly required to ship troops and supplies to the east coast of North America. Warships were also require to escort convoys to distant locations such as those of the East India Company and also to be available to guard British overseas drydocks, repair facilities and stores.

Shipbuilding was further stretched by the demands of private and public organisations wanting to extend exploration and further scientific discoveries, frequently on the other side of the world. It had quickly been calculated by the French and Spanish that the combined French and Spanish Armada would easily outnumber any British ships able to assemble in the Channel that August and that a decisive blow could be struck at Britain – although apparently the Spanish were much more enthusiastic than the French.

Further opportunities arose through the state of British government and administration in the summer of 1779. The series of wars in the 18th century were demonstrating their colossal costs, leading to a huge national debt and the political undesirability of continually raising taxation. The decades preceding 1779 had not been notable for strong, united governments or any real appreciation of the possibility of invasion (remember Napoleon was still at school at the time!), The remarks of an Excise Officer called James Chubb at the time show just how unready Britain was – “The British great fleet was not nearby in the Channel …… the coastal batteries were in bad repair and had little ammunition”. In fact, the latter had to be sent down to Pendennis from Devonport once the alarm was raised.

Chubb himself had seen the enemy fleet from high ground somewhere in Cornwall, estimating at least 100 ships plus some small vessels. He noted that people in Cornwall expected the enemy to land and take Plymouth and then invade overland. Hasty instructions from London told the Cornish on the south west coast to burn all corn and drive cattle inland if the Spanish and French did land.

Cornwall did produce some military response. A force of 77 miners was raised, possibly under the influence of John Rogers of Penrose, and met in Truro, singing psalms, on the 21st August with the intention of going to Plymouth to help improve the fortifications – note that this was a week after the fleet was first sighted. There they were all paid 5 shillings ‘for their trouble’. No record of their arrival in Plymouth has been found but in the event there was no landing, or attack there.

Once again Britain had had a lucky escape but the invasion attempt did have the effect however, of inspiring the Cornish coastal boroughs to start forming Volunteer Associations for their defences and to write to Lord Edgcumbe about their anxieties. Letters, which he presented to the House of Commons, dated from the 26th August (Penryn) to the 13th September (Bodmin), reported town meetings and resolutions; Helston, Marazion and Falmouth also wrote of their concerns. The King became involved as a letter in late October, from Lord Mount Edgcumbe to John Rogers Esq reported that His Majesty had approved the Cornish gentlemen who were offering to serve as officers in the new Volunteer Companies and had signed their commissions. Their arms and ammunition could be collected from Plymouth Gun Wharf.

At the end of the year, the King’s Speech in Parliament included “The Designs and Attempts of our Enemies to invade this Kingdom, have, by the Blessing of Providence, been hitherto frustrated and disappointed. They still menace us with great Armaments and Preparations but We are, I trust, on our Part, well prepared to meet every Attack and to repel every Insult” and he went on to praise the National Spirit.

The list of 77 miners can be found in Cornwall Record Office in RP/37 while the Edgecumbe letter can be found in RP/43. The letter from John Knill is RP 38/1. Hardy's report to the Plymouth Port Admiral is also in CRO, DDRP38/2.