On this Day 11th December 1807
A New Synagogue for Penzance

On 11 December 1807, prominent members of the Jewish community in Penzance signed a lease for a synagogue. This was in fact the second synagogue in the town, erected on the same site of an earlier synagogue, built some 50 years earlier.

Jews had been living in Penzance since at least the early 18th century. The Royal Cornwall Gazette recorded in April 1817 that a Mr Levy of that town had died at the age of 100 and was said to be “the oldest Jew in the county”. The first purpose-built synagogue in Penzance, which no doubt Mr Levy attended, was constructed in 1768 in the back yard of 1 New Street, which was at that time “a killing place”, the phrase used in a conveyance document, sadly lost:

It was released to the congregation under contract to a member of the Branwell family. The Branwells also lent funds for the synagogue and were involved in its construction. They similarly leased and helped to build the second synagogue on the same site in 1807-8. (1) It is this building, which is still visible today. Access to it was gained through a narrow alley off New Street. (2)

The parties concerned (in the second transaction in 1807) were Joseph Branwell, who made over "…a Meeting House or synagogue lately erected in New Street, Penzance where there was a slaughter house used by Branwell to "Lemon Hart, Hyman Woolf, Henry Ralph Elias Magnus and Lemon Woolf (all of Penzance).” (3) 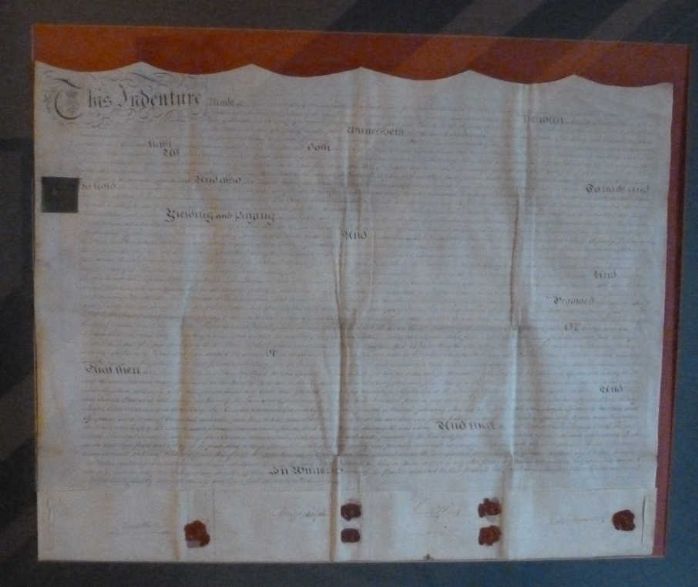 Above, the original of the 1807 conveyance, or indenture

The early 19th century accounts of the synagogue contain some interesting records relating to the new building:

They are headed: "Mr Lemon Hart, President and Treasurer of the Hebrew Synagogue" and they demonstrate the importance of the connection with the Branwell family. One of the earliest entries records "….cash received of Mr Joseph Branwell towards the building of synagogue, 20 pounds”. …. Among other items noted was a payment of three shillings for three loads of hay, which was laid under the floor as an insulator and was still in place when the building was stripped in 1983. (4)

The alley mentioned above now leads to a cycle centre. The fact that the synagogue was built in such an inauspicious location in a back street is itself of historical significance, as explained in an English Heritage document:

After the Resettlement of 1656, Jews were prohibited from building on the public thoroughfare. Consequently, synagogues such as Bevis Marks (1701) were tucked away in a yard, the façade turned at right angles to the street. Continuing hostility to Dissenters throughout the eighteenth century was a further reason for maintaining a low profile, explaining the plain façade and ‘back door’ entrance to Plymouth synagogue (1761-2, the oldest Ashkenazi synagogue in use in the English-speaking world). (5)

In common with most eighteenth-century synagogues, and nonconformist meeting houses, all the South-West synagogues had plain exteriors to avoid unwelcome attention and envy. For these reasons the entrances of many eighteenth-century synagogues were tucked away from main thoroughfares. Both the Plymouth and the Exeter synagogues have only one entrance and that fronts on to a narrow pavement which is used only as a pedestrian short-cut, whilst … (that of Penzance was) hidden away in the back streets. (6)

Of equal importance in this regard is the willingness of prominent members of the local Cornish community to offer their moral and financial support to the Jewish community, in order to enable its members to practice their faith. Such tolerance and acceptance was evident throughout the 18th and 19th centuries in Cornwall, at a time when Jews in other parts of Europe were victim to discrimination, oppression and vicious pogroms.

Bernard Susser adds that there may be an additional reason for not making the entrance on the main road, a reason which would indeed apply to the Penzance Synagogue, which faces east:

Ideally, the synagogue should be built with an east-west orientation so that the worshipper on entering the synagogue would be facing the ark and at the same time facing Jerusalem. (7)

Dr Melissa Hardie, Founder-Director of the Hypatia Trust, who has carried out research into the Branwell family, reports that Joseph Branwell (1748-1813) was the first cousin of Thomas Branwell, whose daughter Maria Branwell was the mother of the Brontë sisters. Indeed, it is thought that 1 New Street, where Joseph Branwell lived, was the original Branwell family home, having been originally owned by Martyn Branwell, grandfather of cousins Joseph and Thomas. It is unlikely that Joseph Branwell was the signatory to the first conveyance, since in 1768 he would only have been 20 years old. It is therefore likely that this document was signed by another member of the Branwell family. Interestingly, 1768, the year the first synagogue was built, was also the year that Thomas Branwell married, and moved to the house on Chapel Street where Maria Branwell was born and grew up.

In 1837, 1 New Street became incorporated into the synagogue.

This On This Day was adapted by Susan Soyinka from her article Penzance Synagogue: A Brief History, which was written in support of an application to English Heritage to revise a listing of the Star Hotel, Penzance, to include details of the former synagogue at the rear of the hotel in New Street. The application was submitted in July 2014, with the help of Nick Cahill, Leader of the Historic Environment Team at Cornwall Council, and was approved in July 2015. The full article is available on the Internet, and also on the website of Historic England.

The Buildings of Judaism, in Places of Worship, https://content.historicengland.org.uk/images-books/publications/dlsg-places-worship/heag124-places-of-worship-lsg.pdf/ Historic England, 2017

2. The Lost Jews of Cornwall, op. cit. p. 295. This section was written by Evelyn Friedlander.