It is not easy to find any document from almost 700 years ago but Penzance is fortunate in that one is held in the National Archives of today’s date, and has been translated from the Latin. It describes the property of Henry Tyes, who held the manor of Alverton. It mentions lands and buildings and lists the many different tenants who were liable to pay different taxes according to their status and activities. The Manor lands included most of the settlements of Penzance, Newlyn, Mousehole, Sancreed and Madron. It had been a Saxon Manor and with the Conquest of 1066 became more firmly entrenched in the feudal system, with several owners, or Lords, before the Tyes family.

The feudal system is a very general term and, with variations of detail, was still generally operating in the late medieval period. The basic premise was that all the land was held by the King and was shared out amongst his supporters on the agreement that when summoned, they would provide a certain amount of military support to the King. In their turn, these landholders sublet land and premises to tenants who provided services such as work on the Lord’s land at harvest time, and paid taxes and rents which provided his income. Some examples of the taxes in this Alverton document include an annual tax on fishing boats, tax paid on the cutting of turf or peat, and on using the watermills, as well as a general sort of tax per head (chevage).

The daily lives of tenants of Alverton Manor depended very much on the will of the Lord of the Manor or an appointed person when he was absent, and historians have commented on the often very harsh features of the system in the south-west i.e. Devon and Cornwall, where an unusually large percentage of serfs – virtually slaves- are seen in Domesday Book, and the relatively low number of manumissions (making free) in the succeeding centuries up to 1322. The Alverton tenants listed in this document are free tenants, burgesses, conventionary tenants and villeins. It is not stated how many of the villeins were servile but there would be little arguing with the Lord and his courts.

There was a specific reason for the collection of information for this document. Henry Tyes had in fact been executed in London on the 16th March, about 3 months previously. His crime having been treason, his manor of Alverton, and his other properties therefore reverted to the King, who wished to know their values. The information was collected by Richard De Rodenye, the Constable of Bristol Castle from local men sworn to tell the truth. 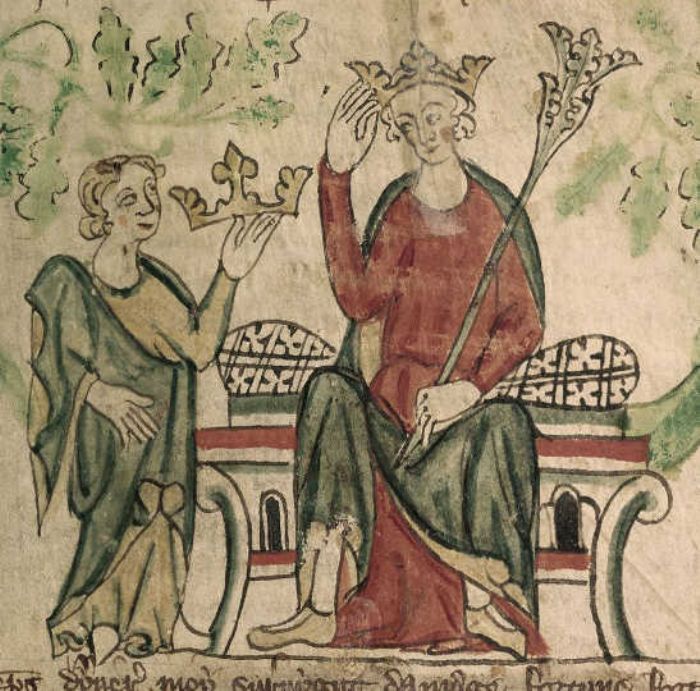 The treason of Henry Tyes consisted of his taking part in the long running dispute between the King – Edward 11 – and a significant section of his barons, which included Tyes. The King’s reign began in 1307 when he was just 23 and within 5 years he was continuously embroiled with this group of his barons, in what amounted to almost a civil war. This made life particularly difficult for the King who was also frequently engaged in conflict with Scotland – an inherited problem. He could in theory, call on all his barons to support him with an army, and many responded but were defeated by the Scots (Robert the Bruce) in 1314; this was followed by a natural disaster of a widespread famine and the King’s popularity began to fall rapidly.

Unfortunately he seemed to lack the talent of a leader, in managing and encouraging the barons who could be his main support, and instead favoured a boyhood friend, a Gascon called Piers Gaveston, who came to control all access to the King and received more and more extravagant gifts and honours, including that of the Earldom of Cornwall. This aroused great anger among many of the barons, culminating in 1312 in the execution of Gaveston at the hands of the Earl of Warwick and others. The King wanted revenge but it took some years to gain support and it was not until 1322 that he was successful.

England was once again engaged in trying to pacify Scotland and whilst the King was sending out almost continuous demands to form an army and march north, the Close Rolls held in the National Archive also preserve many orders he sent out to try to control the activities of the rebel barons and to capture their leaders. For example, in January 1322, the rebels captured and burnt the town of Bridgenorth, killing many of the King’s men and taking others for ransom.

Edward immediately ordered the news to be spread via all churches and sheriffs that towns and castles should organise themselves for defence and – at the same time – call up all men between 16 and 60 and hold them in regiments ready to answer the King’s call to Scotland. The rebels were defeated at Burton on Trent in March, and then again finally at Boroughbridge, where some of the leaders, including Tyes were captured, taken to London (probably – the record just says ‘The City’) and executed,

The King’s victory at Boroughbridge was followed by a reign of terror, executions followed by the wholesale acquisition of properties by which the King and his supporters enriched themselves without any fear of law or justice. Their success did not last long and within 4 years Edward faced the invasion of England by his French wife Isabella and in the following year – 1327 – was captured, deposed and murdered.

There is, sadly, little evidence on how all these violent events in such a turbulent reign, finishing up with the death of the Lord of the Manor, actually affected local people in the Penzance area. The general news, as it developed, would have been heard sooner or later via church sermons and announcements of the Sheriff of Cornwall to the local gentry. Some men from the Manor were liable to be ‘called up’ by Tyes and may well have travelled across England to fight in one action or another, bringing the news home – if they survived. Ships calling in en route from London, perhaps to Ireland, would have provided some information. It is not known how often Tyes was actually here in his manor over these years, but this made little difference to his tenants as a constable or other officer would have been appointed to act for the Lord of the Manor and the manorial courts continued to collect taxes, fines and rents. Cornwall after all, was lucky in being some distance from the centres of fighting. The weather, the harvest, the state of fishing and mining discoveries were probably of far more interest.

See also On This Day 25 April 1332 which covers the grant of a market and fair at Penzance to Alice, the sister of Henry Tyes, to whom the Manor of Alverton was returned by Edward III.