Like his more celebrated countryman Henric Kalmeter, who visited Cornwall from Sweden in 1724/5, Rheinhold Angerstein made the long journey to St Just to visit the tin and copper mines. He wrote extensive diaries which contain detailed observations and numerous drawings of a variety of subjects. His record of the journey from London to the south west, for instance, includes several drawings of Portland with observations regarding strata and the fossils to be found therein (whether he realised the significance of what he he had seen seems doubtful as he makes no mention of any perceived relationship between strata, fossils and time and it would be another 20 years before John Whitehurst published the first detailed account of this relationship) He also includes drawings of numerous machines: for scutching hemp; a fulling mill; a newly invented malt kiln; hemp and flax spinning; and numerous other devices and depictions.

His visit to Penwith is part of his journey from Plymouth to Bristol which he began on May 14 1754, arriving in St Just on 22 May 1754 and making it back to Bristol by June 1 1754. He took what might be referred to as the Great Way Round. On leaving Cornwall Angerstein observes, “As soon as one leaves Cornwall one sees the people doing other kinds of work. In Cornwall, most of the men are miners and young women are occupied in the stream-works and on the dressing floors.”

So what of Penwith? Of Penzance Angerstein is most interested in imports and exports and observes that the locals prefer Russian iron to the Swedish because it is imported as ballast and therefore much cheaper and also less brittle. Mr Johns, he says, sells between 40-50 tons of iron per year and Mr Blewett of Marazion between 2-300 tons. As for timber, Mr Johns again is a major trader but Angerstein advises that selected timber should not be sent to Penzance as the sole market is for use in the mines. 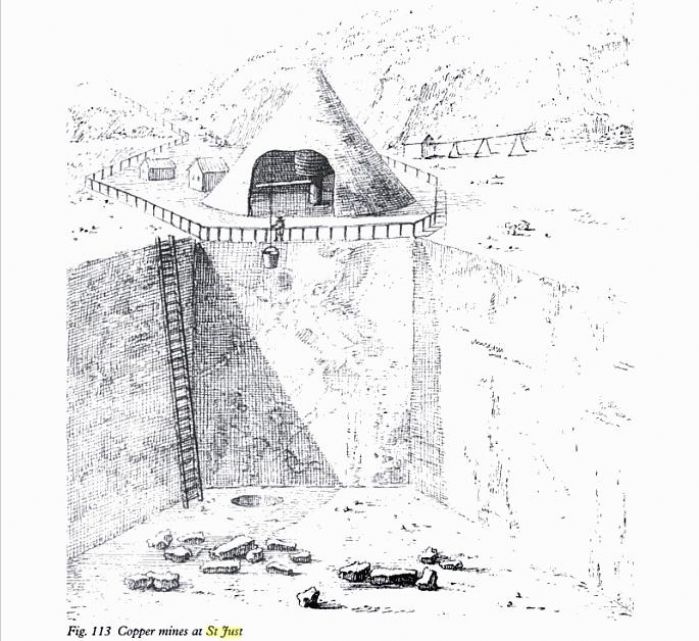 Angerstein's day out to St Just takes him via the Merry Maidens, St Buryan, Logan Rock and Land's End (by which time he's clearly lost track of where he is as he thinks he's travelling south) before he arrives at “St Just, a village know for beautiful women”. Along with the beautiful women St Just's big attraction is the large number of mines, both tin and copper. He says little of tin, possibly because he has discussed it extensively elsewhere but he says there are two copper mines in St Just which were discovered by a German 60 or 70 years before. He is probably talking about the mines at Wheal Hazard and Roscommon which were first worked by the Mines Royal in the 1580s. Hazard, in the 1750s was being worked by the Usticke brothers (see On This Day 28 February 1587) and Roscommon is described by Borlase as being "one of the most properous mine of the last 40 years" (William Borlase, Natural History of Cornwall, 1758). Roscommon copper mine is marked on Thomas Martyn's map of Cornwall of 1748, (though not by name which has led to erroneous assertions that it is in fact Levant Mine). Mining, says Angerstein, has created a culture in which everyone is so keen to get into the minerals industries that agriculture has been neglected and mismanaged.

The next day saw Angerstein depart Penzance for Marazion and on to Helston then, on the 24th, via Penryn to Falmouth. His visit to Penwith was brief, two days at most, but his precise observations combined with his frequent drawings render his diary especially valuable particularly because, as an outsider, he is inclined to explain what he is seeing rather than assume his reader will already have the necessary background. He is also a contemporary of William Borlase and of the map-maker Thomas Martyn and one wonders whether he made use of their works before making his trip through Cornwall. It must be said though, if art or fashion is your thing, Angerstein is not your man, give him a horse whim or burning house every time.

R.R. Angerstein's Illustrated Travel Diary 1753-1755 can be found on the Internet at: Google Books (this link goes direct to the Plymouth to Bristol section which includes Penwith)

or as a real book

Thomas Martyn, A New and Accurate Map of the County of Cornwall, 1748 (this is generally acknowledged to be the first accurate modern map of the county. Martyn is reputed to be a relative of Malachai Hichens who is said to have completed work left unfinished when Martyn died in 1751)