On this Day 3rd September 1502
Registration of the While an Cruen Ton Gwynn tinworks at Calartha, St Just.

In 1495 legislation was passed that tin bounds should be personally registered at the“next law court”, meaning the next travelling tinner's court in the district. Alan Buckley has identified 10 St Just bounds which were registered at the Lelant travelling courts between 1498 and 1508. While an Woth in Truthwall was the subject of On This Day 20th March and this article will look at While an Cruen ton Gwynn which was located in Calartha.

While an Cruen ton Gwynn was registered on 3rd September 1502 by Lawrence John, acting on behalf of himself and Harry and Jacob Thomas. It was described as being at Byll Calatthra and as being 32 perches by 10 perches, about 175 metres by 55 metres. Calatthra is Calartha, readily found on the OS map just north Pendeen and east of Lower Boscaswell. Another bounds, registered at Lelant in 1508 was called Whele an Chy and was also located at Calartha, this time described as Bell Calartha and being adjacent to the bridge. It seems reasonable to assume the Byll Calatthra and Bel Calartha are one and the same and that we are just seeing varied representations of the same name in this time before standardised spelling. Since there were clearly at least two workings in the location maybe bill/bell should actually be read as bal, Calartha Bal? 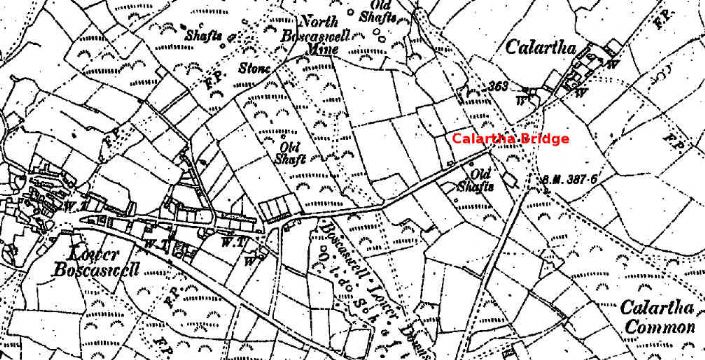 Over time Byll or Bil seems to be the name most commonly used: Bill Lode, Bill Adit and Huel Bill all appear on maps, plans and records right through to Geevor days. But the variation of Byll and Bell indicates how fluid these things are as spoken dialect Cornish is rendered into a written text and both uses survive until at least the mid 19th century. The bounds registrations were originally set down in abbreviated Latin, interspersed with bits of English, French and Cornish but their source was the spoken word, probably Cornish, of men such as Lawrence John.

What about the name of the actual working, While an Cruen ton Gwynn? While is obviously the later Wheal, or as Moody puts it in the late 18th century, huel, indicating a workplace. Several wheals together would make up a bal, as in the case of the nearby Trewellard Bal which Moody shows as consisting of some 16 or more individual workings, such as Huel Zandras, Huel Fen and Huel Widden.

Cruen is uncertain but may be a representation of the Cornish Kurun, meaning crown, as in top of the head, while gwynn generally means white or fair. So we have something which suggests Whitehead's Works or Fairhead's Works. Maybe this an early reference to the Angwin family, Angwin meaning fair, who are known to have lived in Bojewyan in the 16th century?

Whatever the meaning of the name, the tin lodes exploited by the streamworks at Calartha in the early days of the 16th century continued to be worked for as long as tin was mined in St Just. Geevor was still working Bill Lode in 1989 and had developed Karn Kei and Bridgeworks lodes, both shown on the Moody map of 1782, in the early 1960s. Tin was won from Calartha Bal for at least 500 years and who knows how many years before the day in 1502 when Lawrence John registered his bounds at Lelant?

Allen Buckley, The Tudor Tin Industry, Penhellick Publications, 2009. This is the key source for the early bounds registrations.

Charles Moody, A Survey of the Tin Bounds Siyuated in the parishes of Madron, Gulval, St Just, Ludgvan, Towednack, Sancreet, Paul, Morvah and Sennen in the County of Cornwall. The property of Samuel Borlase esq. and Others, 1782. This atlas of tin bounds is held in the Courtney Library of the Royal Institution of Cornwall.