On this Day 20th October 1919
Disaster at Levant Mine

The Levant man engine was nothing like the giant puppet which paraded Cornwall in 2016. Levant's man engine was a form of elevator constructed to take the men up and down the shaft in the deep mine. By 1855 Levant was at about 230 fathoms (1380 feet) below adit, about 1600 feet deep from the surface. For the men the day began and ended with an arduous ladder climb, 60 minutes down and 90 minutes back up, a ladder climb which was taking its toll on the men and adversely affecting the working of the mine. The minutes of the adventurers' meeting of 14 August 1855 record:

The agents having recommended that a man engine be erected on Phillips Shaft: Resolved that the necessary steps be taken for carrying out the same at once.

By April 1857 the shaft work and man engine construction had been completed and in June 1857 the cost book included William Thomas and James Henry Edwards, the man engine drivers, for the first time. The days of the long ladder climb were consigned to the past. The man engine was not erected on Phillips Shaft, as the agents had recommended, but on Daubuz's Shaft which soon became known as Man Engine Shaft and was the scene of the terrible accident in 1919.

Man Engine Shaft and the associated engine were extended on two occasions, in 1888 and then again in 1897-8 when it reached its final depth of 266 fathoms below adit (1596 feet). In 1893 the old 20” single acting whim engine which had driven the man engine since 1857 was finally retired after 63 years of service on the mine. The new engine was to enjoy a much shorter life!

1919 was a tough time for the Cornish tin industry, prices were low and at Levant there was dispute with the workforce. The mine had lost many of its experienced workers to the military during World War One, in 1917 the figure was put at 127 men. Levant was in a run-down condition and rumours circulated about the compromised safety as a result of neglect. Whether the man engine was neglected is difficult to ascertain now and that was not the finding of the inspector who conducted the enquiry into the accident. He attributed the accident to a hard to detect manufacturing flaw in the metalwork which connected the man engine rod to the beam which drove it and from which it was suspended. However, by 1919 the Levant man engine was the only one left in use and was 62 years old. It s also indisputable that the fall-back safety system, known as catch-wings and designed to prevent the rod from falling down the shaft should it part company with the beam, failed to work in the upper levels of the shaft.

For whatever reason the brutal truth is that the metalwork securing the rod to the beam did fail and the rod did crash down the shaft taking all the shaft infrastructure with it and smashing the so-called safety system. The top 360 feet of the rod, by now broken away from the lower part of the rod fell 276 feet before lodging in the shaft amid the debris and timber which it had dislodged as it fell. This debris pile sheltered the men lower down the rod from the falling rocks and timber and most of these men were eventually able to make their own way from the shaft into the mine and along to skip shaft and engine shaft. Above the blockage were the dead and dying, stranded in precarious locations in the shaft which had been stripped of all ladders, platforms and other timberwork. They were virtually unreachable.

The grisly details of the accident and its immediate aftermath can be found elsewhere and are not repeated here. But it is often overlooked just how catastrophic such an accident can be in a small community, the ripples which spread outward from each individual death intersect and become a community wide wave of bereavement as multiple deaths within extended families take their toll. 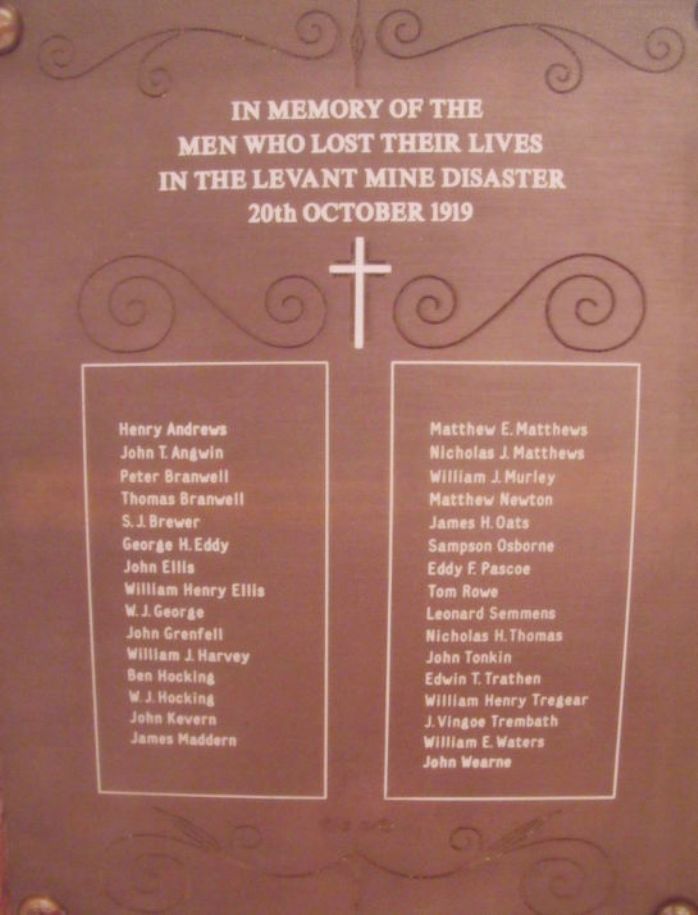 Memorial plaque to the men who lost their lives in the Levant Man Engine Disaster of 20 October 1919. (This plaque was previoulsy in Trewellard Wesleyan Chapel and is now in the Hard Rock Museum at Geevor, photo: Clint Hosking)

The impact of the Levant tragedy was also deepened by its its timing, less than a year after the end of World War one. At least five men who died on the men engine had served in World War One: Henry Andrews; Matthew Eddy Matthews; James Henry Oats, Leonard Semmens; and Vingoe Trembath. Both Leonard Semmens and Vingoe Trembath had a brother who was killed in the war. In addition at least of two those men injured on the man engine, Charlie Freestone and Sidney Dennis, were also survivors of the trenches.

William Henry Ellis was the foster father of Ralph Ellis, a tunneller in the war who returned home with his nerves shot to pieces and was committed to the county mental asylum at Bodmin after being first on the scene of another accident at Levant when four trammers were killed in August 1920.

William John Murley was the nephew of William Henry Ellis (above). His two brothers, Nicholas and Henry, both survived the war but left St Just for Australia and New Zealand, both dying of lung disease before they were forty.

Edwin Trathen was the older brother of James Trathen who was killed in action during the second battle of Bullecourt. Their brother Richard served in WW1 with the United States Army having emigrated to Grass Valley. Their brother Stephen had been killed in Levant in 1908.

John Tonkin was the father of Willie Tonkin, who was a tunneller in World War One in the same unit as Ralph Ellis. Willie was one of the four trammers killed in Levant in 1920.

All of these men and boys had mothers, wives and sisters who suffered multiple bereavements in the years between 1914 and 1920. Effie Tonkin, daughter of John Tonkin said in 1920, when her brother Willie was killed, that this was the third time Levant had taken a man from her family. Her brother John had been killed underground in 1912, though at Geevor.

Warfare and mining exacted a heavy toll on St Just and Pendeen between 1914 and 1920.

The Levant Cost Books are available at Cornwall Record Office

The personal details included here come from a research project in support of commemorative drama, The Trench, performed at Levant in July 2016. The sources for this were mostly census data, parish records, newspaper reports, military service papers and conversations with local people.

The Cornishman of 22 and 29 October 1919 has long detailed reports of various aspects of the disaster at Levant. For a more concise account see: Levant: A Champion Cornish Mine, John Corin, edited and expanded by Peter Joseph, Trevithick Society, 2013.