Daniel Hollow of St Ives was a man who led an eventful life at sea, though as we've seen before in On This Day seafaring in the past was a hazardous business. But the thing about Captain Daniel Hollow was that he seemed to get into trouble with the public gaze full upon him so his mishaps made the press and have been immortalised for all time.

Daniel Hollow was born in St Ives in 1799, the second child of Daniel and Elizabeth. His father was a fisherman and seafaring was in the family. Daniel first makes the news on 10 December 1846 when in charge of the brigantine Thomas of St Ives. In a strong gale from the NNW Thomas is working in towards St Ives pier when she misses stays and is driven onto 'Pednolver' rocks. The crew were all safely rescued but the spectators watched as Thomas was swiftly destroyed by the power of the sea. 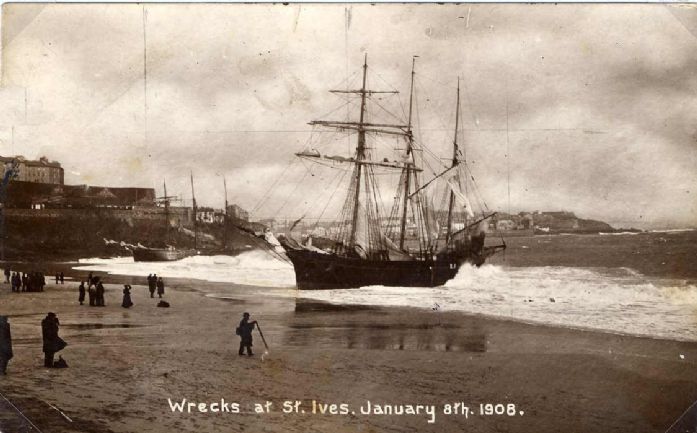 Thomas was carrying a cargo of copper bound for Swansea and was probably a regular member of the Welsh Fleet, carrying copper and coal between Cornwall and south Wales. Brigantines were relatively small two masted vessels, often around 100 tons, with a square rig on the foremast and a main mast on which the mainsail would have been a fore and aft gaff rig while the topsail would have been square rigged.

The loss of Thomas was recorded by John Tregerthen Short (JTS) in his diary for 10th December and also made it into the pages of the Royal Cornwall Gazette on the 18th December. The Gazette says she sailed from St Ives on the 11th but was forced to return after losing her fore-top mast. After waiting for the tide she set out again but missed stays owing to a strap on the main-sheet-block having carried away. Apart from the date the account pretty much accords with JTS who is usually an informed and reliable witness.

Daniel Hollow drops out of the limelight for several years, probably making regular voyages between Cornwall and south Wales and basing himself in St Ives where he has a growing family with his wife Elizabeth. In 1855 he appears in the newspapers again in remarkably similar circumstances to the incident at Pedn Olva. This time he is skipper of the Diana, an American built, Swansea registered vessel carrying coal from Swansea to Southampton. On the 13th February 1855 he took Diana into Mount's Bay seeking shelter from a storm. Having ridden at anchor for some time Diana's anchor cable parted and she began to drift so Hollow decided to make for the Mount harbour, almost there the wheel chains broke and Diana was now at the mercy of the wind. She was driven into the pier by the sea and one of her crew, William Trevorrow of St Ives, was crushed to death between the vessel and the masonry of the harbour wall as he attempted to save himself. Daniel Hollow suffered fractured ribs but survived along with mate, George Ransom, John Daws, John Lowe, Robert Edmonds, James Rumbly, John Sullivan, Thomas Davies and Daniel Hollow (presumably the skipper's son). Hollow had been skipper for just over a year and Diana had had extensive repairs carried out three months earlier.

Daniel Hollow had a long career. In 1870, at the age of 70, he was still at sea and had charge of the Caroline Goodyear, a Teignmouth registered schooner. On 20th July the Cornish Telegraph reported that she had put into Cephalonia on her way from Bahia (Brazil) to Venice. The conduct of the master then led the British Consul to institute an enquiry, which led to the suspension of his certificate, as a master in the merchant service, for two years.

What precisely is meant by the conduct of the master has not yet been uncovered but at 70 years of age the loss of his tickets must have been quite a blow to Daniel Hollow. It seems Daniel went back to sea though, but in a diminished capacity and it is perhaps inevitable that he should have met his end in another vessel. On 30 November 1872 The Cornish Times reported the discovery of the St Ives fishing lugger Mystery, owned by John Paynter, washed ashore at Stanbury Mouth near Bude. There was no sign of her crew but hope was held out that they had been picked off the lugger by a passing steamer. One of the crew was recorded at Daniel Hollow aged 60. Evidence suggests that the age has been wrongly recorded and that this is in fact Capt. Daniel Hollow born 1799. With Daniel Hollow on the Mystery were three sons of the owner and Joe Quick.

Colin Hollow of Melbourne, Australia, has carried out a lot of painstaking research on his family's past and if you'd like to find out more about the seafaring Hollow man of St Ives take a look at The Hollow Log Colin's regular update on his voyages through the waters of family history.