Today the streets present a scene of destruction; roads and pavements, gas and water mains, culverts and crossings have been ruthlessly torn up by violent and overwhelming rush of waters. The careful, plodding work of years, improvements carried out with the rates unwillingly wrung from a population experiencing the impoverishing decline of the staple industries of the town; rates spent, nevertheless, with rigid economy, in the hope of making St Ives an attractive watering-place – the results of all this have, for the nonce, been swept away. Cornish Telegraph Thursday 15/11/1894. 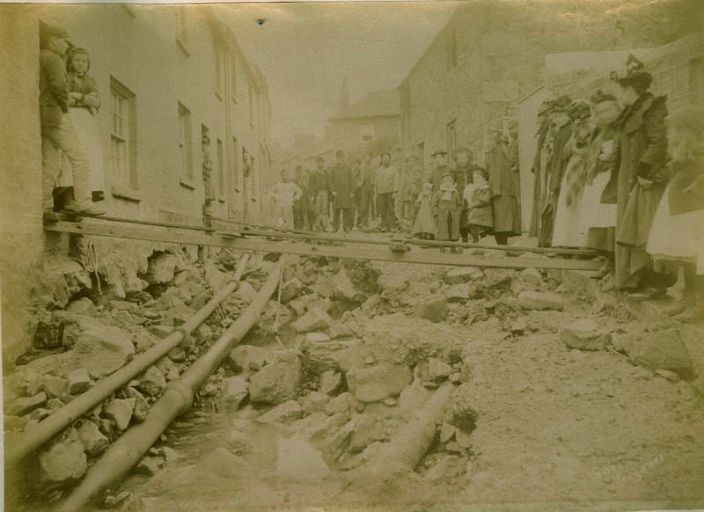 The great flood was the consequence of of heavy rain over the preceding 25 days. Penzance meteorological station recorded just over 10 inches of rain from October 19 to November 11 with 2.33 inches falling in the final 24 hours. For comparison a figure of 3 inches was given for the whole of the period 1 October to 11 November 1893. The heaviest rain fell on the 11th November but the worst consequences were reported Monday 12th November. 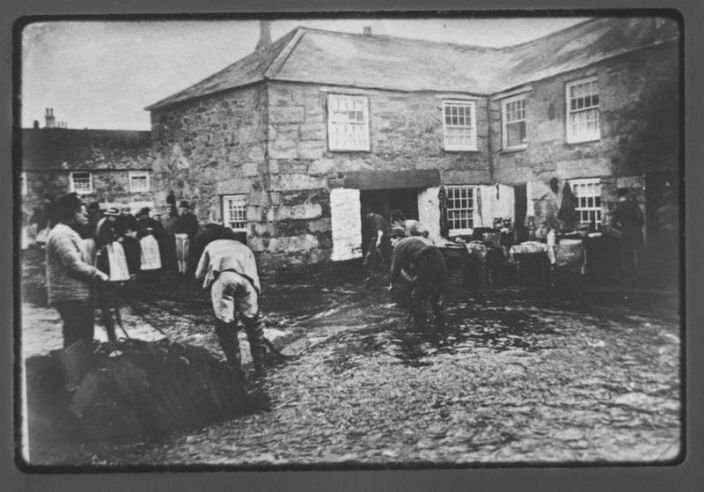 Anywhere that a stream flowed down to the the sea there was a scene of devastation. The Tolcarne River did huge damage in Newlyn. At Chyandour the rushing water passed straight through the centre of the village, devastating houses and cutting off communications. The Trevaylor Stream was swollen to gigantic proportions….sixty feet wide and swept away the Bleu Bridge (in Borlase's day the Bleu Bridge stone had indeed been used as a bridge over the stream and it seems to have been this flood which moved it) and Trevarrack Bridge. Indeed bridges were badly hit: in St Just alone the bridges at Bojewyan, Kenidjack, Tregaseal and Nanjulian were all either swept away or badly damaged, though Nancherrow bridge did survive despite the tremendous torrent which came down the Tregaseal valley, flooding the foundry and sweeping away much of the remaining mining infrastructure of the lower part of the valley, including the stamps of Botallack Bottoms.

The deluge was disastrous for the St Just mining interest and may be said to have been the final nail in the coffin of Botallack Mine. Only the Wheal Cock section was now under development but the sheer volume of water flooding into other parts of the mine eventually broke through and flooded Wheal Cock on February 5th 1895. There was no loss of life but it was the end for the mine. At Levant, huge quantities of water flooded down Man Engine Shaft inundating the deep levels and forcing men to scramble up ladders to escape the water. Levant Mine survived however, the water being pumped out within a couple of weeks.

Between St Erth and Marazion stations the 7.50am goods train from Truro to Penzance was completely derailed when the flood-damaged track gave way beneath the weight of the train overturning the engine and all four trucks and blocking the track. Rail replacement buses were used to move passengers between the two stations. 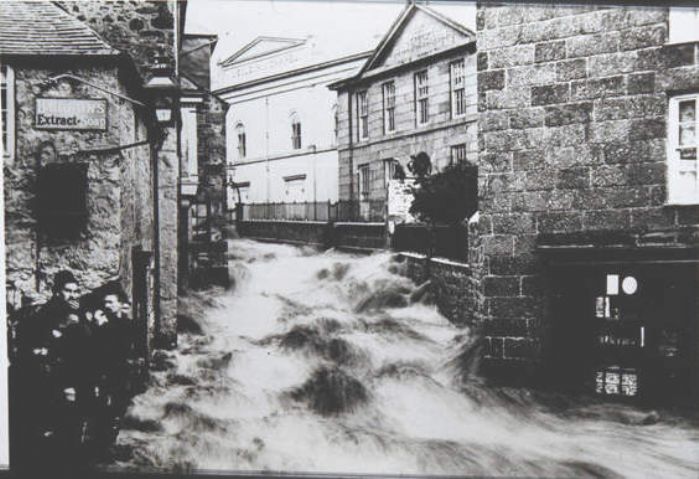 But it was at St Ives that the effects of the weeks of heavy rain wrought real havoc. The Stennack was turned into a huge floodway as water from the moors cascaded into the town through St Ives Consols and down the steep valley. A new water main had been laid in March and the disturbed ground was easy meat for the torrent which rapidly created for itself a deep gorge down which flowed tons of sand and gravel, blocks of granite, kerbstones and, in one case, the collapsed front of the Renowden family's house. This was no slow-to-build disaster. Once it started it unfolded rapidly.

Young Renowden was looking gloomily at his wrecked abode as I passed by. He said “I was sitting by the fire at nine o'clock when I saw a small stream running along the floor. Before I had time to look around it was up to my waist, and I ran upstairs……..by 10 o'clock the whole of the front of the house had fallen.

Similar damage occurred up and down the Stennack where residents lost their possessions, carried off to the sea by the cascade of water or smashed to pieces by the power of the flow. Several hundred tons of assorted debris were deposited in Tregenna Place in a pile five feet high and stretching across the street.

Like many in St Ives Mr Jacobs, a jeweller, was rescued by boat from his upstairs window. Mr Jacobs said his business had been saved by his recent investment in an air-tight safe which had floated on the tide and preserved some of his stock. Meanwhile, he was straining dirt and slime through a sieve in an effort to retrieve what he could of the contents of his shop.

Gibson and Sons, those renowned photographers, were not slow to see an opportunity offering Instantaneous Photographs of the Recent Floods… Street-an-Nowan under water, removal of furniture, destruction of houses, bridges etc. This in the Cornish Telegraph just three days after the disastrous floods. Bit crass or simply ahead of the game?

By the time the next edition of the Cornish Telegraph came out on 22nd the view was that things were not as bad as first feared though nonetheless serious, especially in Newlyn, St Ives and Gulval. The call was now for action to improve roadways, streets and sewers, the need for which action was now undeniable. The conduct of private individuals and others carrying no direct responsibility was singled out for praise while the attitude of the parish authorities and Local Board as they attempted to grapple with the crisis was much less admirable.

Prompt action by the authorities in St Ives however did avert further catastrophe when adits were opened up to allow a freer flow of water from the flooded Wheal Trenwith. In addition no less than 220 men had been employed to clean up and make safe in St Ives and over 300 cart loads of debris, mud and rubble had been removed from Tregenna Place. It was estimated that at least £1000 would be required to repair the roads, gas and water mains and construct a new culvert for the Stennack River. Not to be outdone by Gibsons, Mr William Trevorrow of Tregenna Place had a capital series of photographs of the flood at its height…

I don't know about you, but to me this all sounds awfully familiar 120 years later.