1.00 in the afternoon, and the air most violently stirring.

A storm blowing in along the coast from the north-east, venting its power in St Just parish. Within a moment – in the twinkling of an eye, you might say – all is changed. Furze and turf ricks turned over and ruined. There is snow in the blast, yes, but that is by no means all; the storm has collected slates, tiles, wood – even birds. Those bearing witness were amazed: they tell of “elongated inverted cones reaching from the earth into the clouds”, each spinning as it came.

In the town, hailstones as big as marbles have battered out the window glass. Here at Wheal Spearn, where the copper and black tin comes in to be counted, we lie nearer to the sea; nearer to the weather. And this, no doubt, is why we were so “fearfully shaken”, as if by the wrath of God. In truth, notwithstanding the stoutness of the building, we fully “expected it would have fallen”.

Mr Pearce had come over from Penzance, and he rushed in to tell us of other marvels he had beheld. He told of “a most magnificent electrical phenomenon”. He told of how, looking out towards Cape Cornwall, he had seen with his own eyes a veritable “pillar of fire, exceedingly vivid and apparently of the thickness of a man’s arm”. He recounted how it rose “suddenly.. to a vast height”. He could not tell whether it came from sea or land, but in a trice it had reached the fullness of its height and – as if it had met the dome of the skies – spread out, with “splendid coruscations followed by a terrific peal of thunder”.

Two other men, one sheltering in a barn - one caught in the open moorland – were quite “thrown to the ground”, quite prostrated by the “tremendous shock”, believing no doubt that the Day of Judgement was upon them. 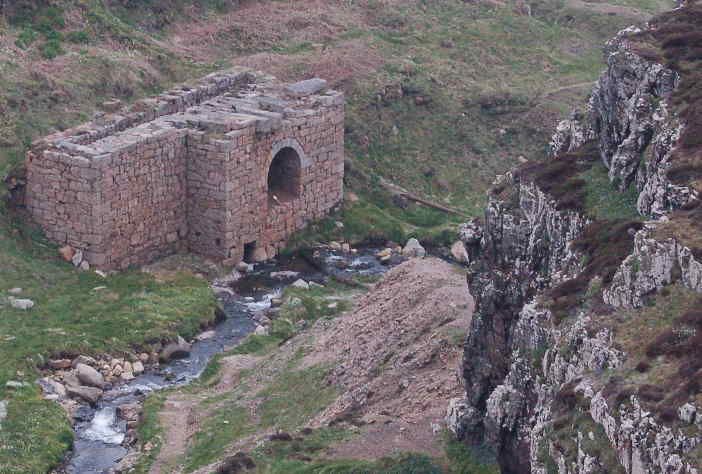 But surely the most unfortunate, on this December afternoon, were those working underground. At Boswedden, where the great wheel works the south side of the Nancherrow Valley, the men forty-four fathoms down could only think – hearing the thunder above - that the shaft was falling in. Some said it was exactly as an earthquake sounds from under the surface. Some said the sensation that passed through them was like “an artificial electric shock”.

We have seen today, with our eyes, the fire and cloudy pillar of which the Book of Exodus tells. But where is our latterday Moses, to lead us to our Promised Land?

The Celtic and Other Antiquities of the Land’s End District, Richard Edmonds, 1862, pp 136-137. There is no mention of this particular event in the press, but the Royal Cornwall Gazette Friday 25th December page 2 mentions a “water spout” seen over St Agnes heading west on “Thursday last”, so probably 17th December. Edmonds also gives a full description (page 139) of another “remarkable whirlwind” attended by “furious noise”, just west of Penzance, on 14th December 1859.

Biblegateway and Biblehub (both accessed 27 11 2017) for Biblical references

Cornwall in Focus (accessed 27 11 2017) gives background detail on Wheal Spearn which is adjacent to a just south of Levant Mine.

Cornwall Calling (accessed 27 11 2017) gives background detail on Boswedden Mine, a mine which could be powered entirely from its great water wheel for pumping, hauling and stamping, provided there was enough water.