On this Day 25th December 1724
Sir Vyell's Stamps in Trewellard

On Christmas Day 1724 Sir Francis Vyvyan of Trelowaren leased a decayed stamping mill in Trewellard to Sibella Hichens, John Ustick and John Dennard. The property was known as Sir Vyell's Stamps and included the stamps plot for dressing tin stuff, water and watercourses and other 'commodities'. Half of the lease was to John Ustick and the other half was split equally between Sibella Hichens and John Dennard. It was to run for 99 years or three lives, the lives being: John Lanyon of St Just, tinner; Edward Giles of Morvah, tinner; and John Thomas, son of Reginald Thomas of Morvah. The rent on the stamps was 10 shillings divided according to shares of the lease and each lessee was to pay a consideration; Hichens and Dennard paid £3-3-7½d and Ustick paid £6-7-3d, a further like sum to be paid by 24 June 1725. 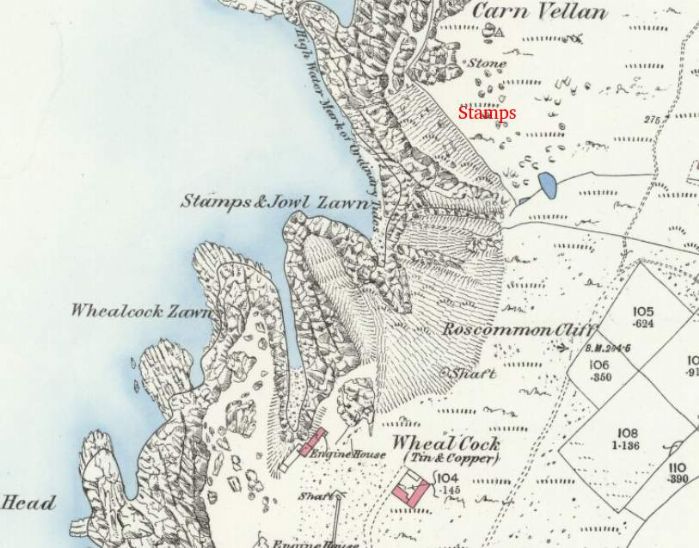 The approximate position of Sir Vyell's Stamps with the later leat taking water to Levant Mine immediately below. (map courtesy of National Library of Scotland)

Sir Francis Vyvyan was the 4th baronet and succeeded to the title when his uncle, Sir Vyell Vyvyan, died without issue 24 February 1696. The Vyvyan family of Trelowaren were Lords of the Manor of Trewellard. The lessees are all local gentry, Hichens and Dennard from Penzance and John Ustick from Botallack while the 'lives' – Giles, Thomas and Lanyon, are probably all tinners, Edward Giles and Reginald Thomas certainly are. John Thomas, Reginald's son, was seven years old in 1724 so could be expected to live long enough to give the lease some security.

The values on this lease are not paltry sums: the rent is worth about £100 per year in today's money but the 'consideration', with a total value for the payments in December 1824 and June 1825 of £25 and 9 shillings, would be worth a bit more than £5000. In another lease, issued to Reginald Thomas in 1730 for Chyrose lower stamps, a couple of miles away, the 'consideration' was £104 5 shillings which would be worth over £20,000 today.

The stamps in Trewellard known as Sir Vyell's Stamps had been the subject of a fair bit of litigation regarding maintenance and water courses over the course of the previous 70 years. In 1753 the stamps had been leased to Richard Edwards of Carnyorth on the lives of his children with the same 10 shilling rent as in 1724. Edwards and his son Francis constructed new leats and diverted the water away from Sir Vyell's Stamps to new stamps of their own making. This is why the 1724 lease specified that the stamps are decayed. The long running litigation demonstrates just how important access to water was to the tinners at the time, apart from human or animal muscle it was the only source of power available. Steam engines were only just beginning to appear but it would be almost 100 years before the first 'fire engine' was seen in St Just.

The dispute was eventually settled by the arbitration of William Gwavas, a London barrister of Cornish extraction who had returned to Penzance. Gwavas found that the occupant, now John Carveth, owed three years rent to be paid in full and was liable for £15 to repair the stamps and £15 costs. Precisely what happened next is unclear but by 1724 the stamps and water courses had clearly not been repaired. However, over the next thirty years all seems to be well until 1754 when Henry Hichens of Penzance complains to Sir Richard Vyvyan's attorney in Helston that John Ustick has taken his water and he wishes it to be restored as soon as possible. 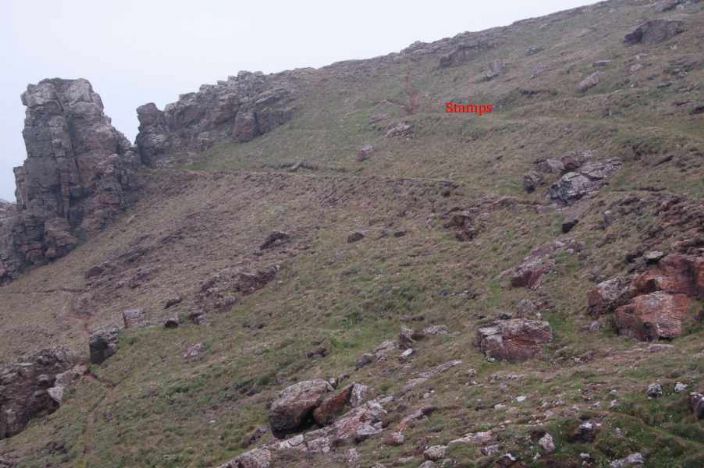 This complaint was still rumbling on 18 years later and again money was being spent on legal opinion and this time a map was produced to show where all the disputed water courses and stamps were. It's difficult to align the map precisely with the current landscape as there have been so many changes but one thing that does emerge clearly is the surprising location of Sir Vyell's Stamps. It stood on the steeply sloping flank of Carn Vellan as it drops down into Stamps an Jowl Zawn. From a naming point of view it all makes sense, Carn Vellan means mill carn and Stamps an Jowl is said to mean The Devil's Stamps. The map in fact shows two batteries of stamps, Sir Vyell's Stamps and Stamps an Jowl fairly close together above the zawn. What's more surprising is just how steep the slope below the stamps is and how problematic delivering water to the stamps must have been. You can't help wondering whether the disputes about Sir Vyell's Stamps arose from the practical difficulties of working the stamps as much as from any devious illegal intentions. 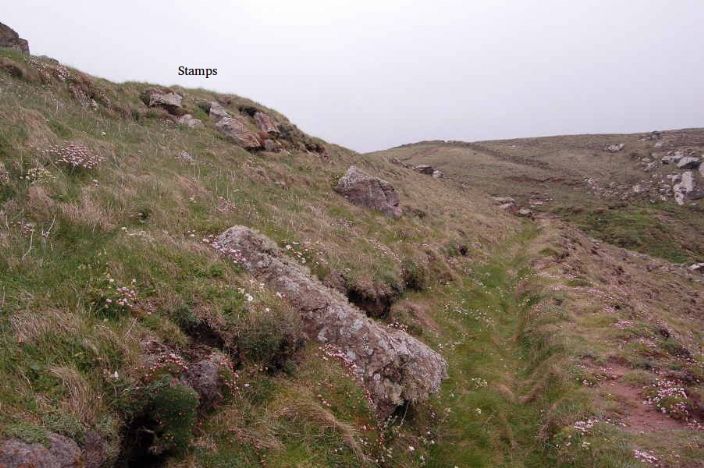 The landscape of Carn Vellan has changed considerably since Sir Vyell's Stamps were constructed. Following the reopening of Levant Mine in 1820 a new leat was created to take water from Stamps an Jowl around the cliffs to the mine. The leat crosses the face of the cliff just below the position of Sir Vyell's Stamps and dressing floors may well have been erased in creating a course for the leat. Nevertheless, the site of the old stamps can still be seen, a revetted wall supports a flat platform or terrace and set in the terrace are granite footings, placed there deliberately as part of the stamps battery.

It is clear from documents in the legal paper trail that the numerous batteries of stamps in this area were fed with water from two main sources; the southern supply comes from the stream between Roscommon and Carnyorth which picked up water from Carnyorth adit while the northern source was largely fed from Trewellard adit which drained Trewellard Bal. The precise relationships between all these people, particularly the Usticks, and the various mining operation has yet to be established but it is known that the Ustick family owned the whole of the mineral rights on Roscommon tenement along with 7/16ths of the rights on Botallack Cliff. This is made clear in another dispute in which they became embroiled in 1717 when they mined under the tenement boundary on Cudna Reeth lode (Wheal Hazard) and became involved in a dispute with a Londoner by the name of Henshaw who owned the other 9/16ths of Botallack and was keen to have his due.

The lease documents between Sir Francis Vyvyan and John Ustick, John Dennard and Sibella Hichens are held in the Cornwall Record Office – RH/7/14/3/1/8-10.

A description of St Just in 1724 can be found in The Kalmeter Journal, Translated and edited by Justin Brooke, Twelvheads Press, 2001