Bodmin: county town? “Sleepy Hollow”, more like. No promenade, no hotels to speak of, so no visitors. Not much fish to be had, and precious little tin. Just the dead weight of official business: a courtroom, a county gaol, and an asylum. But a journalist has to go where he is sent. And so here I am today, the Telegraph’s man on the spot, at Bodmin, to welcome the troops home from South Africa. 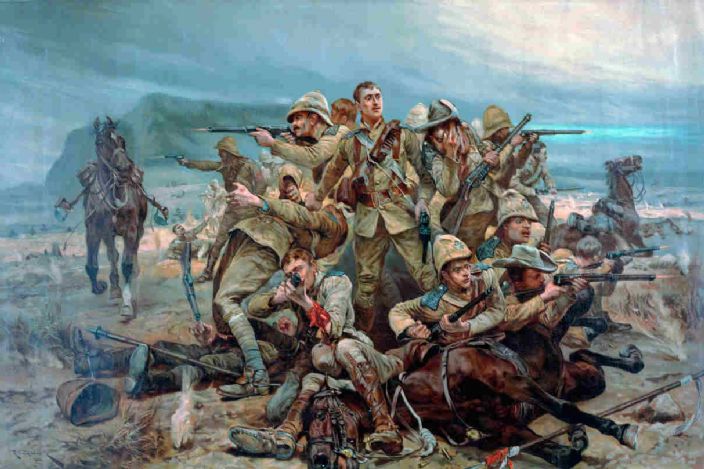 These boys are not from the Duke's, they are the remains of C Squadron of the 17th Lancers about to surrender at the Battle of Modderfountein.
(public domain image of original painting by Richard Caton Woodville 1856-1927)

“Bystander” is the name you’ll know me by, if you take the Telegraph. And today there’s certainly been plenty of by-standing. Even for the return of the boys in khaki, there was precious little excitement; the townsfolk conducting invisible business – if any - and the flags equally sparse.The main street starts off as “Fore Street”, but as it proceeds out towards the Lunatic Asylum it becomes “Bore Street”. And those of us standing at the ready with our pencils and notebooks were inclined to consider that a more fitting name.

The train was due to arrive at 6.17. The Mayor turned up, and a collection of redcoats and mounted yeomanry. I have a few notes, and intend to make something of these rustics. Unfavourable comparisons with our West Cornwall section: “clang and jingle of spurs and bridles”, “gallant warriors” and so forth. There was a little parade to the station, but only the favoured few – “privileged few”, I think, if I can get that past the editor - allowed inside. I was rather hoping that things might get a bit rowdy, and that some venturesome soul might be persuaded to scale the wall. I licked my pencil in anticipation: the cheers, the fisticuffs, the quick time march out of the gate. That’s what we might have expected in Camborne, or even Penzance. But Bodmin? Too tame, I fear. Too tame by far.

I must say that, eventually, the town acquitted itself well. There was the Mayor and Corporation, the Volunteers and their band – I think “imposing sight” would be a fair description. But my professional duty was to provide names that our readers would recognise, and so my notebook pages filled up in the usual, unspectacular way – from Helston, Mr Eva, Mr Staples the bugler, the station master Mr Cowan; from Redruth Sergeant Smith; from Penzance Mr and Mrs Tonkin – come to welcome their son – and one or two others I didn’t quite catch.

Oh, the rumpus and racket as the train pulled in. Mr Staples tooting away (none too skilfully) on his bugle, detonators on the line, and the rousing cheers. And inside the train, the faces all pressed up to the windows, then the doors flying open as the lads stepped onto Cornish ground. One despatched his kit-bag along the platform with an eloquent kick. One danced a jig – or perhaps a “war dance” – and threw his helmet in the air.

It is fair to say that even Bodmin, on a Monday night, was more to their taste than the far shores of South Africa. I’ll throw in a few snatches of dialogue – our readers like that. “Good old Penzance; how’s things looking down home?” That sort of thing. Plenty of men from Penzance: four more, apart from Sergeant Tonkin. Seven from Hayle, including Lance-Corporal Trestrail and Corporal Phillips. Bugler Lander and six more from Helston, including the two Staples boys. All coming home, really home, tomorrow – back to their home towns, fit and well, and ready to welcome May.

Well, that’s a few ideas put together. Time to set to work, now, on the official version.