On this Day 9th March 1891
The Blizzard in the West

It was on Monday March 9, back in 1891 that the giant blizzard struck the county. The fine weather of the past weeks suddenly ended, the temperature dropped quickly, and snow began to fall as the wind increased in strength. There was tremendous damage to property in the next few days, trains were de-railed, many ships wrecked around the Cornish coast, and throughout the county there were stories of lives lost in snowdrifts…

On the railways in Cornwall and Devon some passengers were snowed up in a train for 36 hours… During this week the takings on the Great Western showed a drop of £12,980… A train that left Penzance at 6.25 pm that night arrived at Plymouth at 3 pm next day. There was a drift of snow 20ft high at Grampound… When a gang of men arrived to clear the track the cold was so intense that the snow froze on the men's clothes, practically encasing them in ice...

It was the wedding day for Polly Blewett that was approaching as fast as the Great Blizzard. Polly of St CIare Street at Penzance, was due to be married on Tuesday March 10 in 1891 and several guests were travelling to Cornwall. The train, The Dutchman, did not arrive at Penzance on that frightful Monday. It had left London at 11.45am, was timed to reach the Cornish terminus at 3pm but was snowed up near Camborne.

This was how the bridegroom’s brother described the situation to The Cornishman reporter, ‘Snow had been falling in Plymouth more than four hours. To our astonishment, the nearer we approached the usual mild genial Cornish districts the snow and driving sleet increased.’ 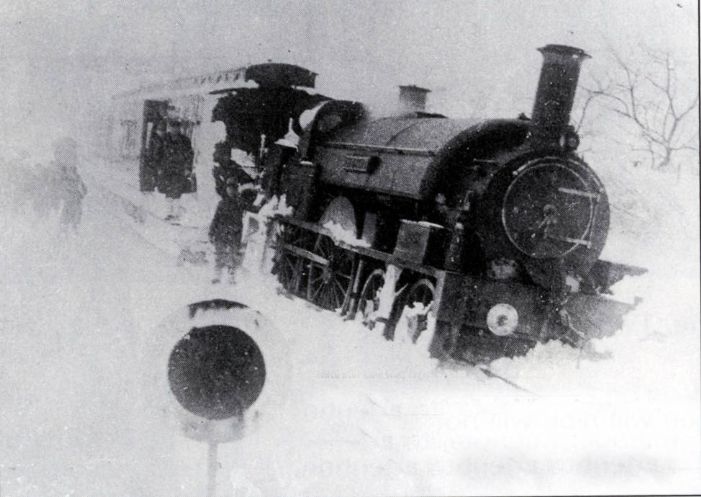 There was a stop for an hour at Truro. About 200 yards from Camborne station the engine and front coach ran off the line on hitting a drift of snow. The station master took five ladies on from the train to his house and the booking clerk took jugs of coffee to the remaining passengers. Several stayed the night at the Railway Hotel at Camborne. The snow and the cold was a surprise for some who were returning home from the sunshine of South Africa!

The train arrived at Penzance at 3 pm on Tuesday ‘the experience was one I would not care to repeat’ said the groom’s brother, and the postponed wedding took place on the Wednesday.