In the previous Penwith Paper, we left Charles Ross, newly elected to the Parliamentary Borough of St Ives, arriving at Penzance station in triumph and looking forward to the day when he could contest the Western Division, which stretched from Truro to Lands End (except for the Parliamentary Boroughs of St Ives and Helston) and traditionally returned unopposed Liberals. One of these Liberals was Sir John St Aubyn of St Michael’s Mount , who had represented Penzance, St Just and the villages round about for most of his adult life.

Charles Ross was not to be rewarded with the early election he hoped for. All over the UK, boundary changes and an extension of the franchise were underway, collectively forming the Great Reform Act of 1884. It is this Act which brings in the electoral system we would recognise today. Most men were now able to vote – tenants and owners of property worth £10 or more – and this nearly doubled the number of voters in England. The old Western Division which Charles Ross had hoped to contest was abolished; the new “St Ives or Western Division” constituency contained most of the area that would later be Penwith (but not at this stage the Lizard and Helston area).

The change made parliamentary representation seem much more immediate and local. The old Western Division had offered two seats, but after 1884 this element of proportional representation was dead in the water; from now on, each constituency would return only one MP. And unluckily for Charles Ross, Parliamentary Boroughs such the town of St Ives (with only about 1,000 voters) were absorbed into the new constituencies and would no longer return their own members.

But although Charles Ross had his recently-won constituency pulled from under his feet, its name was retained. This was in itself controversial enough, especially in Penzance. Although there were forlorn hopes that the new “Western or St Ives Division” would soon be known simply as “Western”, the name of the old constituency, others in the town predicted that it would be called “St Ives” for ever more – and were incensed. “Practically, our town is the most important in the county; and it is a gross injustice for Penzance to play second fiddle to such a comparatively insignificant place as St Ives”, wrote one correspondent to the Cornish Telegraph. He also reminded readers about a recent spot of bother in St Ives concerning alleged irregularities, and the “political stigma” attached to the name.

But the protests of Penzance fell on deaf ears, even after St Erth and the Scillies were persuaded to add their voices. The constituency would be called St Ives – a feature that would still be causing some confusion to Penzance residents in 2015. And so it was that Ross found himself up against Sir John St Aubyn, as the two seats merged into one. Ross might once more convince St Ives fishermen, worried about Irish competition, that a Tory government was their best option, but would his luck hold in the farming and mining areas to the south and west, and in the most populous borough in the area? 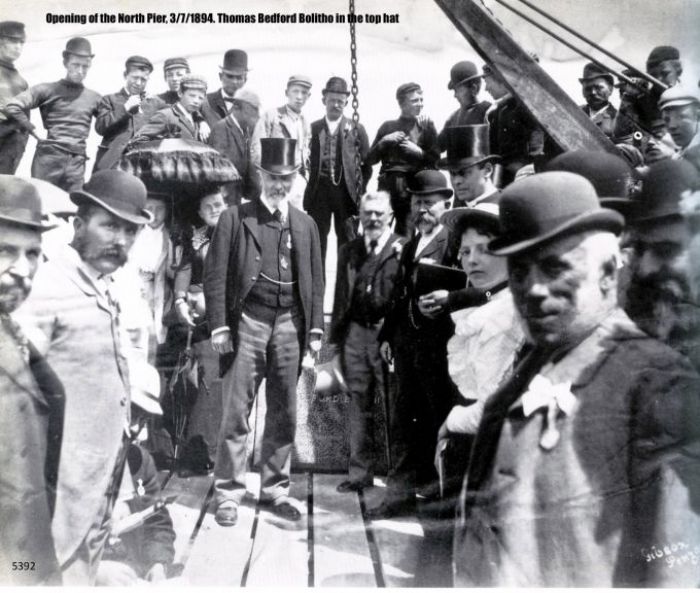 St Aubyn, accustomed to uncontested election, was also put on his mettle. The electoral system had lost its stability, and the new political landscape was difficult to map. There were suggestions that Radicals would not turn out for Aubyn on principle, even if their abstentions resulted in a Tory victory. Proportional representation was still being vigorously promoted, and had become a subject of public debate. Penzance Town Council even received a letter asking it to support women’s suffrage, which was good for a laugh.

Apart from these troubles, the election also took place against a background of local discontent. In Penzance during the months leading up to the election there were calls for a free public library, a cabman’s shelter and compulsory provision by landlords of one toilet per household. There was a vast amount of money being spent on the floating dock, and limited confidence that it was being well-spent. There were complaints about rowdy lads at the Central Hall, and slacking and bad language from improperly supervised workmen. “A man cannot work properly who always has a pipe in his mouth”, asserted another correspondent, claiming that when the Borough had used a direct labour force on the new dock the men had appointed a lookout and stood about smoking for most of the day, but that once a contractor was brought in he had improved matters by sacking smokers on the spot.

At the end of September the Cornish Telegraph printed “A Political Address to the Working Men of the Western Division”. Although the signatory styled himself “A Working Man of Penzance”, the letter has the tone of a syndicated piece. “My brother labourers”, it addresses its audience, and refers to “Tory robbers and rogues”. Although the appeal is still at this date for a Liberal vote, the rhetoric is socialist. “Working men, arouse from your slumber” the writer concludes. “Be unified; be steadfast; be not deluded with a flattering tongue”.

A contested election, although a regular enough event in Conservative St Ives, was a novelty in the remainder of Penwith. Here, the tradition of the old Western Division was that a limited number of voters would return the Liberal without the trouble of voting him in. But now, thanks to the 1884 Reform Act, any old householder could vote – as had been the practice in St Ives and other Parliamentary Boroughs. Suddenly, choosing the next MP was on the agenda for around half the male population.

“Many of us are only babes in politics… we are passing through a transformation from nothings to somethings.” wrote a Mr Steward – evidently one of Charles Ross’ supporters, his claims to be a Liberal notwithstanding - to the Cornishman. Listing the benefits his hero had brought to the town, he styled Mr Ross a man of “true stock and haveage”, well known for his “labours of love and for deeds of charity, a few public but a thousand private”; the “true friend” of the “working man, his career driven by “zeal and self-denial for the common good”. A fortnight later, another letter told fishermen that if the Liberals got into power there would be a war, and naval reservists would be called up. In a final long and fluent letter headed “From a Working Man to Working Men”, Mr Steward claimed that his letters were all his own work and had been written with the help only of a shilling dictionary missing its covers; he added that he did not personally know Mr Ross at all. In a final salvo shortly before the polling stations opened, the Cornishman asked “would anyone again wish to see old England eat humble pie, as she has recently done under Liberal government?” 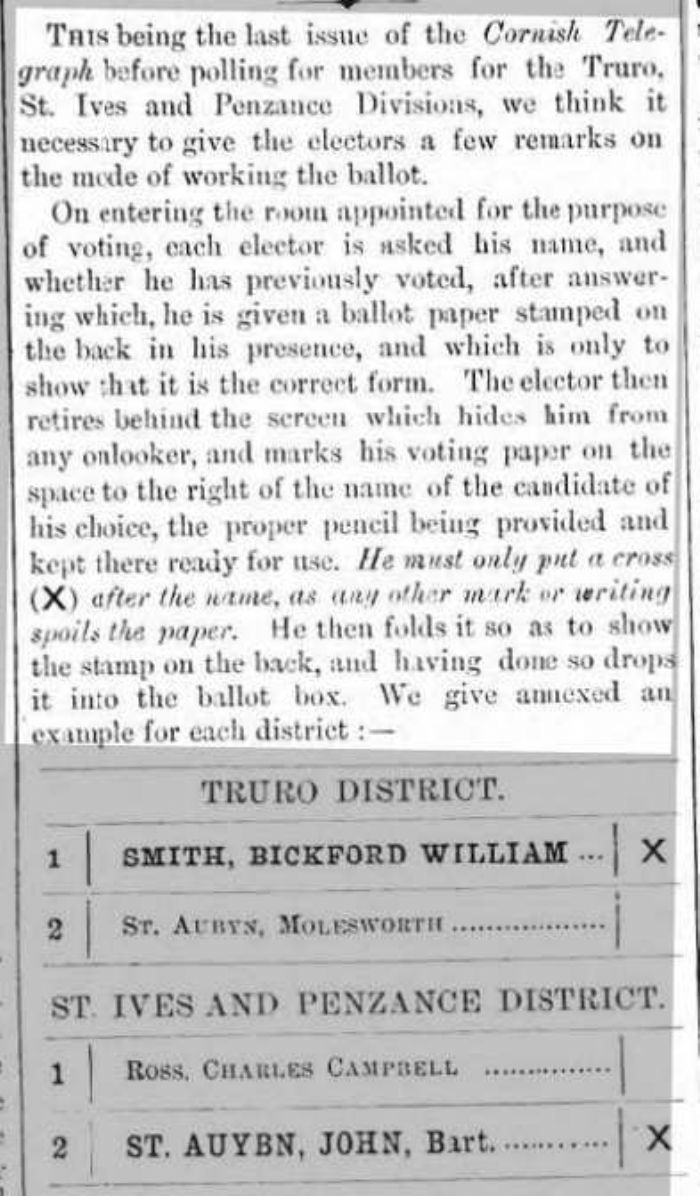 The Telegraph accused Mr Ross of intimidating voters with suggestions that the secret ballot – still barely a decade old – might not be as secure as voters thought, and threats that big spenders would withdraw their custom from Penzance’s Liberal tradesmen. Down at the Quay, Tory ladies were alleged to be giving bribes in the form of free tea, while the men plotted to transfer the coaster trade from Penzance dock to Newlyn. The newspaper compared Charles Ross’ patchy Commons voting record with Sir John St Aubyn’s 27 years of “faithful service” in the Commons. To help the newly-franchised voter unsure of procedure, it published a picture of a correctly filled in ballot paper with a bold ‘X’ next to the St Aubyn name.

The election was held on Saturday December 5th, but votes were not counted until the following Monday. Outside the Penzance Public Buildings (now known as St John’s Hall), tension built, and it did not dissipate when a Liberal majority of 737 was announced . The victorious St Aubyn gave a speech calling for reconciliation and – as a first step along the way – three cheers for his opponent. But this was received only with “hooting and ribald talk”. Inside, the new MP and his family were besieged for nearly an hour after the result was announced. As for Mr Ross himself, he was reportedly “livid with passion” and was “held aloft in the brawny arms of his friends” who carried him up to the top of the steps. Here he delivered his own speech – rich in slogans and rhetorical questions, and later branded “inflammatory” by the Cornish Telegraph.

Frustrated Tory partisans – described by a perhaps rather smug Cornish Telegraph as “infuriated and disappointed rowdies” - roamed the streets of Penzance looking for trouble. They were alleged to be from Newlyn, and almost all were too young to vote: a group known as “Ginger’s gang” played a prominent part. Penzance folk retreated to their homes. The Town Council telegraphed Camborne to plead for the urgent return of officers which Penzance Town Council had complacently hired out, thinking that two men would be sufficient for their own purposes.

While the two policemen waited nervously for their colleagues to catch their train, trouble began in the streets. The public houses were summarily shut and police reservists called out. The Cornish Telegraph had earlier described Ross’ Newlyn supporters, who had manually pulled their candidate round the town in a show of strength, as “asses” and “beasts of burden”. The editor perhaps regretted his choice of words as he hastily barricaded the office windows. Mr Hooper, a furniture dealer on the Terrace, who had displayed placards predicting Mr Ross’ defeat, had his windows broken. Elsewhere, another window fell victim to a chandelier.

When the cases later came to court, the Mayor felt unable to take his place as chair of the magistrates, as he had been the Liberal election agent. Another magistrate, however, stayed – despite having been a leading figure in the Tory campaign. This was Mr Branwell, who interrogated the hapless Mr Hooper rather than the rioters in the dock. Branwell implied that the victim had brought his trouble upon himself, having been warned that his anti-Tory placards were “inflammatory pictures”, likely to cause a breach of the peace. His case was adjourned to the quarter sessions: “we do not want any arguments here”, proclaimed Mr Branwell. The defendants were applauded and their fines paid immediately – by, the Cornish Telegraph hinted, Mr Ross himself. The reports of the hearings confirm that the rioters were teenagers – serving out their apprenticeships as citizens in a democracy.

Liberals were victorious in all the new Cornish constituencies (except for the Mining Division area from Camborne and Redruth up to the north coast, which elected an Independent of radical persuasion). But the Party was split over Home Rule and, within a year, held another election. After nearly 30 years as an MP, St Aubyn - still only 60 years of age - moved into the House of Lords. He was succeeded in the Commons by Thomas Bedford Bolitho, who as a benefactor of Penzance is at least the equal of Charles Ross, and who held St Ives for the Liberals until he end of the 19th century.

Some of the techniques, wiles and accusations in the foregoing account will seem as familiar to 21st century readers as the polling station procedures. Charles Ross was not the last politician to present himself to the constituency as the right man to defend fish from foreigners, and the Cornish Telegraph was not the last newspaper to belittle the supporters of a cause it opposed. For male householders, voting would never be a novelty again. But all electoral contests bring their own excitements, and – once the election fatigue of our 21st century readers and contributors has abated, and we are all ready for more – some of them may well be the subject of a later Penwith Paper.

https://infogalactic.com/info/United_Kingdom_general_election,_1885 (accessed May 4th 2017) both these sites have useful links to specific seats, although information on the pre-1880 MPs is limited to names only