On this Day 10th May 1714
William Limbrey of Zennor

In the PLHG publication Women of West Cornwall Jean Nankervis wrote on Zennor Women and Wills 1600-1750. What Jean was looking for was evidence of how men treated the women in their families. This was a time when a woman's possessions became the property of her husband upon marriage and she became totally dependant upon him for maintenance, even after his death. The terms of wills therefore have the potential to throw some light on how men regarded their wives since they were making arrangements for their welfare into the future. 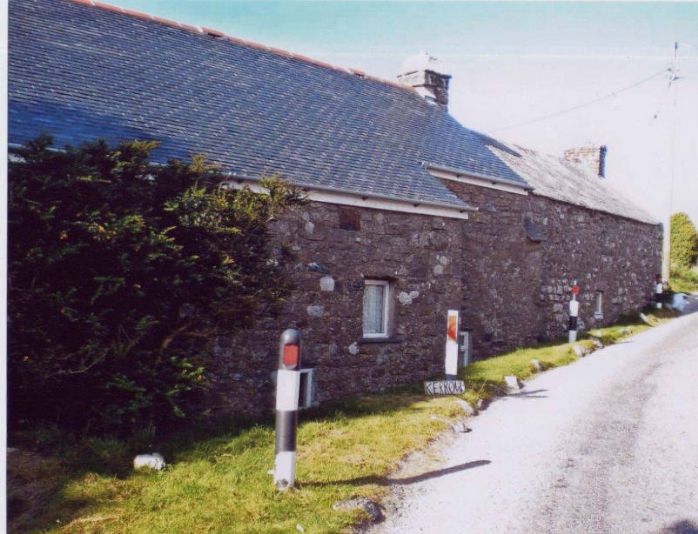 William Limbery (Limbrey) was buried in Zennor on 10 May 1714. He was survived by his wife Susannah to whom he left £6 a year which was to be paid out of their farm at Kerrow. He also left Susannah the room in the house referred to as the inner kitchen and the chamber above it together with their furniture, which he stipulated she was not to sell or otherwise dispose of. The rest of the house was left to their son Richard but William also stipulated that Susannah was to have “her cow”, two heifers, pasture for one milk cow and fuel for her own use.

The picture shows Kerrow farmhouse. The far end is an extension and the first chimney (in the centre of the roof) is the chimney which served Susannah's room.

William Limbrey was one of three men of Zennor between 1600 and 1750 who were described as a gentleman. This is a statement of status and implies that he would not have been expected to do manual work but William did “behave like a gentleman” towards his wife, securing for her both an income and dwelling as well as milk and fuel.

When William and Susannah married is not presently known but there is a marriage in Zennor for a William Lyberie in 1674 (possibly 29 July) to a St Ives girl. William was the son of John Limbrey and his wife Margery Berriman who married in Zennor on 30 April 1649.

William Limbrey was one of the more well off men in Zennor, he was tenant of two thirds of the tenement of Kerrow and clearly lived in a two storey house.

William lived in Zennor until he died in 1757, having lost his wife Luce in 1733. His brother Vivian is probably one of the two Vivian Limberys to be buried in Zennor in the 1780s, the other probably being William and Luce's son.

Jean Nankervis, The Hamlet of Kerrow in Zennor in Homes and Households in West Cornwall, Penwith Local History Group, 2010. (this is really about Kerrow after the Limberys have left)