Humphry Davy was a true son of Penzance. He was born at five o’clock on the morning of 17th December 1778 at No 4, The Terrace (now Market Jew Street) very close to where his statue now stands. The site is marked by a plaque on the wall. The house belonged to Dr John Tonkin, a surgeon and apothecary. 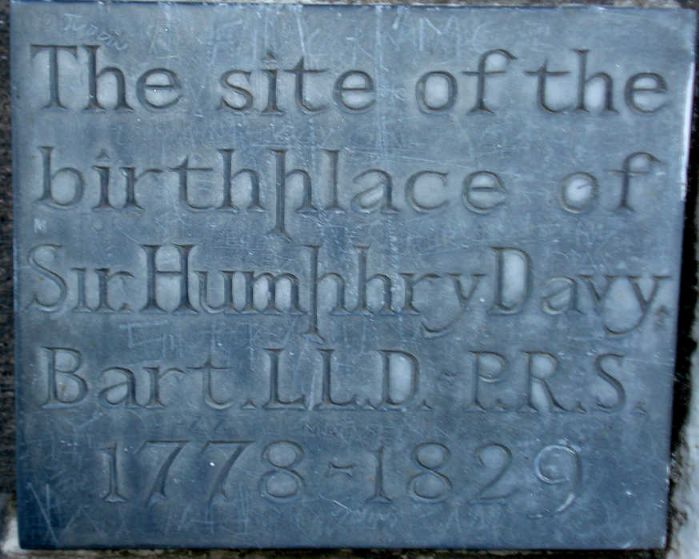 Dr Tonkin had lodged with Humphry’s grandparents, who had a shop in Penzance. Sadly, in June 1757 both his grandparents died within a week of each other leaving three young girls of whom Grace, Humphry’s mother, was the youngest. Dr Tonkin continued to live in the house and took on the responsibilities of guardianship for the children.

In 1776 Grace married Robert Davy. The Davys were a well-established family, coming from Ludgvan just outside Penzance. Many memorials to the Davy family may be seen in the Churchyard. Robert Davy was a craftsman and was particularly noted for his fine wood carving, especially chimney pieces, although at this time chimney pieces were going out of fashion. It was said he was known in the neighbourhood as being ‘the last of the Carvers’. 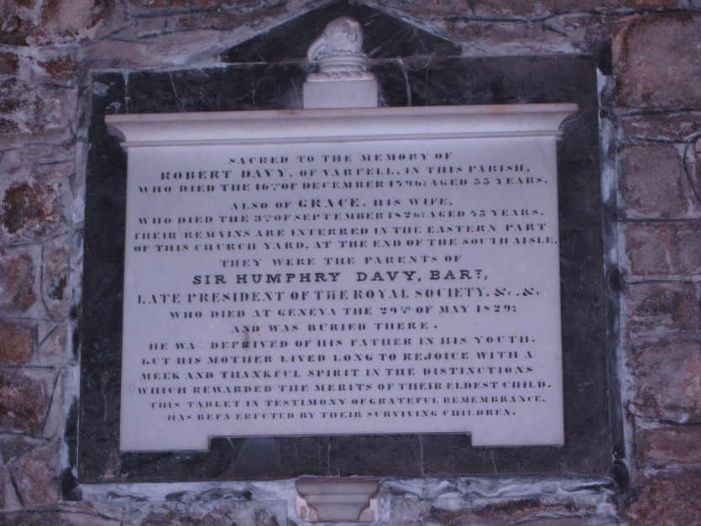 A month after his birth Humphry was baptised in St Mary’s in Penzance. It was then still a chapel of ease with Madron being the Parish Church (see OTD 25 November). The Baptismal Register records “Humphry son of Robert Davy, baptised Penzance Chapel 22 January 1779”.

There are many anecdotes about Humphry being a bright and lively child, leaning to read early and very fast, composing and reciting poetry. Following the birth of his sister, when he was two years old, someone told him that ‘his nose would be put out of joint’ . When he was introduced to his new sister it is said he checked his nose and said ‘ Mamma, my nose is not out of joint!

Davy was fortunate to be born in Penzance at a time when west Cornwall was one of the centres of the industrial revolution. Local men such as Davies Giddy and Malachy Hitchins were connected with the leading minds in the country and the precocious Humphry Davy was able to tread a ready-made path, rising rapidly to become of the stars of the scientific firmament.