On this Day 7th March 1882
Trouble at Penzance Floating Dock

Penzance has every reason to be pleased with itself. The new floating dock is nearing completion, and tonight, the engineers are to close the new gates and keep the sea out. The event has already been delayed by “a misunderstanding about clay”, and pumps are ready to deal with any leaks. This evening's activity is a test run, the new gates are in fact intended to keep the water in the dock when the tide begins to ebb, not keep it out. 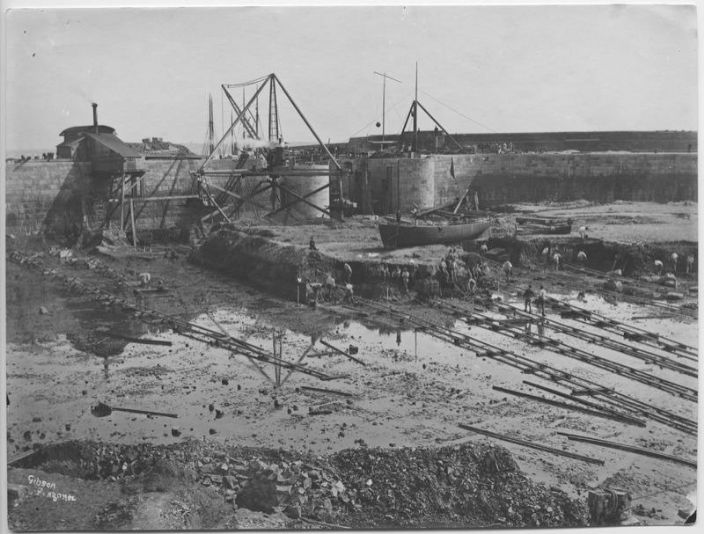 As evening falls, and the tide rises outside, 15 foot of water builds up against the gate. At first, all is well, the pump coping with the small trickle of briny ingress. But now, let the preliminary engineers’ report take up the story: “our attention was arrested by some dark water coming through the middle of the dam”, Beardmore, Barnes and Twigg begin. “It was then evident that the sand in which the base of the dam is bedded was being disturbed. This led almost immediately to the blowing away of the foundation, and the top of about four bays then fell over and the water rushed over the side of the dock”. Keen to exonerate themselves, the engineers make it clear that blame cannot be laid at their door: “…the collapse did not occur through any weakness in the structure, but, in all probability, in consequence of some sand being left behind the puddle”1.

In the Cornishman and the Cornish Telegraph, rival witnesses offer more colourful accounts. The former of these newspapers presents readers with “a bubbling of muddy waters, increasing rapidly, inch by inch, until a mighty upheaval came, accompanied by the creaking, the cracking, and at last the crash of fallen timber – with a sound like the crumbling away of flooring and roofs at a fire”. Masses of lumber swirls around the new dock as the sea pours in, and within a few moments the water has found its own level, although the whirlpool set in motion continues for some time. The Telegraph confides the spectator’s initial hope that all would be well and “the forebodings of the ‘croakers’… falsified”, until “there was heard a cracking of timber and at the base of the dam… a huge bubbling of water. For a moment a huge piece of the dam seemed lifted up. Then it fell and on came a grand rush of water carrying before it the huge timbers like chaff before a wind”.

At the scene is Mr Twigg himself, standing on the pier and availing himself of the opportunity for a smoke. Unlike the “evidently deeply pained” borough surveyor, the engineer is evidently a stoical man and watches events unfold with every appearance of confident unconcern – except that he is observed to be drawing on his pipe rather more rapidly than usual.

The events of that Tuesday night will be described to the Town Council, meeting the following day, as a “calamity… that may be felt for all time” and entail “great additional expense to the one we stagger under”. When talk turns to the probable eventual cost of the dock, figures in the region of £40,000 will be bandied about. The operatives of Messrs Beardmore, Barnes and Twigg will be encouraged to pack their bags and return to London in short order. During the subsequent weeks and months blame will indeed be levelled at the up-country engineers - but also of course at the workmen, and whoever it was that had the whole idea in the first place.

Penzance will eventually have its floating harbour, but at a cost of £40,0002